skip to main | skip to sidebar

The Life of a Witch

Posted by The Richmond Chalice at 13:32 No comments: 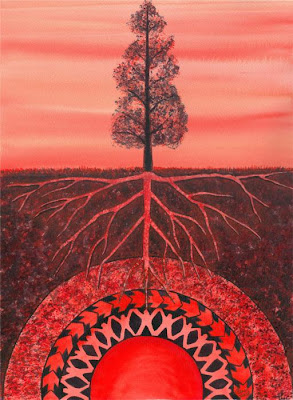 I have just found this lovely meditation concerning the root chakra on you tube.
Watch, learn and simply enjoy!

Ilona
Posted by The Richmond Chalice at 22:34 No comments:

Just watched this meditation video and found it beautifully relaxing and at the same time thought provoking.

Hope you all enjoy watching it!

Ilona
Posted by The Richmond Chalice at 14:43 No comments:

Following on from the last blog about our chalice meeting about angels, I found this video on you tube, which explains the nine orders of angels in a bit more detail.

Hope you enjoy watching it!

Ilona
Posted by The Richmond Chalice at 21:02 No comments:

ANGELS - THE LAST MEETING, A SUMMARY

Merry Meet to All of You!
We had our latest Chalice meeting recently and the theme was Angels. It was a good meeting with an avid exchange of personal stories, beliefs...and yes, problems the attending members had with the subject.
Here's a short summary of the subject matter we touched, I hope you enjoy the material.
Angels
Orders of Angelic Beings

ANGELS:
Closest to humanity, the ones most concerned with human affairs. Within the angels, there are many different kinds, with
different functions. Best known are probably Guardian Angels.
ARCHANGELS:
beyond the angels, tend the larger arenas of human endeavour. Most familiar ones: Gabriel, Michael, Raphael and Uriel.

PRINCIPALITIES
Beyond the archangels, guardian angels of all large groups, from cities to nations to recent human creations, such as multinational co-operations.

POWERS
First order in the second sphere, bearers of the conscience of all humanity, keepers of the collective human history. The angels of birth and death are in this category. They are able to draw down and hold the energy of the divine plan. In this way, powers can send visions to each of us of a global spiritual network.

VIRTUES
Beyond the powers, these are able to beam out massive levels of divine energy. As more people learn to work with the virtues, there will be a greater infusion of spiritual energy for the planet.

DOMINIONS
These govern the activities of all angelic groups below them. They also serve to integrate the spiritual and material worlds. Their work is still connected to our reality, although they rarely contact individuals.

THRONES
First order of the third sphere, they are the companion angels of planets.

CHERUBIM
Beyond the thrones, guardian angels of light and of stars.

SERAPHIM
Highest angelic order, said to surround the throne of God, singing the music of the spheres and regulating the movement of the heavens.

CORRESPONDENCES OF THE TEACHING ANGELS

omen values mean the approx time for sign after invocation, orbit means the time frame an angel might use to work on the invoked subject.
As we briefly touched the subject of spirit guides, we decided to make this the subject of our November meeting.
Autumn Blessings,
Ilona
Posted by The Richmond Chalice at 18:25 No comments:

The Richmond Chalice
Richmond, North Yorkshire, United Kingdom
Hi and welcome to the Richmond Chalice blog. We are Lisa and Ilona and we are really excited about creating this new group in the Richmond area. We feel that there has been a spiritual void, and after waiting a long time for someone else to take the initiative, we finally decided to grab the bull by the horns and start something ourselves. We would like to invite everyone of you to join us on this exciting journey!